@Aurian and I couldn't make our usual (larger) prerelease on Saturday, so we went to a smaller one at a nearby mall on the Sunday. They did 3 40-minute rounds, so it was a nice quick event. I liked that. I ended up going 3-0 with a good, if unexciting, Orzhov pool.

I was definitely happy that I got the kind of sealed pool that I like to play: Some big flyers, removal, a good curve, and a few new toys to play with. I played 5(!) of my rares, which was great, even though only one of them (Battle at the Bridge) was anything close to a bomb. The deck was just full of C+ or better cards, so I lucked out in that respect. 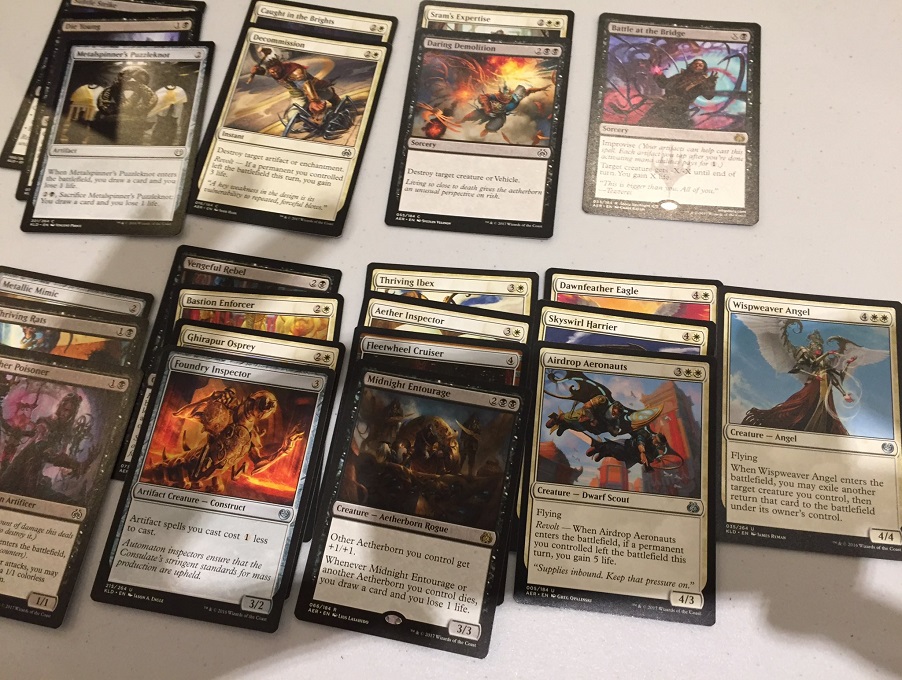 My deck really won through attrition and through the air. The revolt cards I had could be hard to trigger, but gave massage bonuses when I could (the -3/-3 dude and the Aeronauts, mainly). It was more of a good, clean Magic deck than OMGTHERESABOMB!!! My 'bomb' of sorts. While this looks like a fancier Drain Life, it really did save my bacon a few times. Being able to kill a larger threat and gain back life usually swung the game around enough. It won't be good against go-wide decks, but against normal/fair decks that count on a bomb or two, this is an MVP. In my deck, it was really a fancy 2/1 that ate a lot of removal. I didn't have much in the way of tribal synergy in my deck, but giving at least one creature a permanent +1/+1 counter, and it being colourless, meant it was an auto-include. This card will definitely be amazing in a draft deck with a lot of Servo makers, if it can live for a turn. I did get to live the dream ONCE and name SERVOs with the Metallic Mimic and then play this. Often, I got 3 little dudes and then played Caught in the Brights for value. More of a draft/build-around card. I really didn't have many Aetherborn, so this was basically a 3/3 that got me a card when it died. I only got to play it once, so it was just a Hill Giant for me.

From Kaladesh, this was just a beating for my opponents and forced a lot of 2-for-1s.

1. Flying is important. It usually is, but it seemed that a lot of games were getting gummed up on the ground, and flying over was how to break stalemates.

2. Be aware of large armies. The Dawnfeather Eagle (was awesome for me) and the 5/5 rhino that gives your team a permanent pump can be backbreaking and help end stalemates.

3. I would still maindeck at least one artifact removal.

@Aurian built a G/W revolt deck, splashing red for the dragon and removal. She can tell you more, if she likes

I didn't get to see much of her deck. I just know her Freejam Regent won her a game or two.