Is this true? Not exactly. Though IF Shahrazad and Sphinx’s Revelation were put into a blender, poured out into a Magic that Gathering cookie cutter and sundried for abouuuuuuuuuut 3 days….you get Karn, Scion of Urza.

“What the hell are you talking about Johnny? Stop putting tequila in your coffee!”

No. I can’t. It's awful tequila and this is making less and less sense so here’s some nice pictures of magic cards. 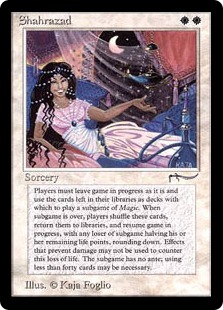 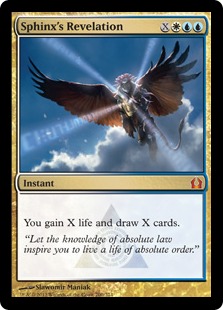 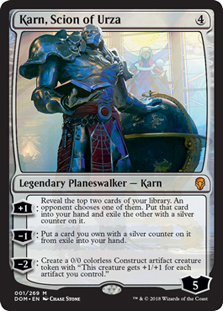 Now that we have those cards in front of us I will explain why I think Karn, Scion of Urza really is the fixed Shahrazad that Magic always wanted.

What we see with this latest manifestation of Karn is one of the greatest sub-game mechanics to hit the game. When it came to the sub-game concept with Shahrazad the biggest problem I’ve heard about was the copious amounts of time it would take to pause a game, play a second game, then go back to playing the first game. Imagine the mirror match where Shahrazad is played 8 times in a single round. Leonardo DiCaprio would literally show up and beat both players senselessly with a bag of tortilla chips until they woke up form the 8-layer nightmare dip they were drowning in. New Karn fixes this by creating a sub-game within a game.

Think of it this way. When you play Karn, Scion of Urza your opponent is now forced to play against 3 hands at once.

The first is the hand that is drawn organically which they generally have little to no information on.

The third is the hand they put on layaway. This is the hand they don’t want you to have right away and/or don’t think they can deal with. Best of all, thanks to the silver tokens put on this exiled hand, this hand is always a looming threat because Karn, Scion of Urza will likely be a 4 of in any of the decks it finds a home in.

It is a massive head game for your opponent and a wealth of knowledge about the resources they have to work with. The “sub-games” are basically stacked on top of each other. Also, much like it was the case with Sphinx’s Revelation, the amount of card draw that is taking place with Karn means the opponent is likely losing the game long before they even realize it. Unless of course they too are playing Karn and the whole game state becomes a battle of wits.

Now the best part of all this is the fact that Karn is 4 generic mana to cast. He can literally be plugged into every deck that wants to make him work. This is huge. We’re talking about a Planeswalker that could easily see play on turn 2 and even turn 1 in the eternal formats. Never mind how busted this will be if Planeswalkers are allowed to be commanders in EDH proper (I predict he would be turbo banned as a commander.) He is in my opinion the new best planeswalker available to the game of Magic the Gathering. I suspect he will make substantial waves wherever he goes.

That’s my 2 cents on the matter. Hope this entry is finding you well. Until next time, have yourself a great day.