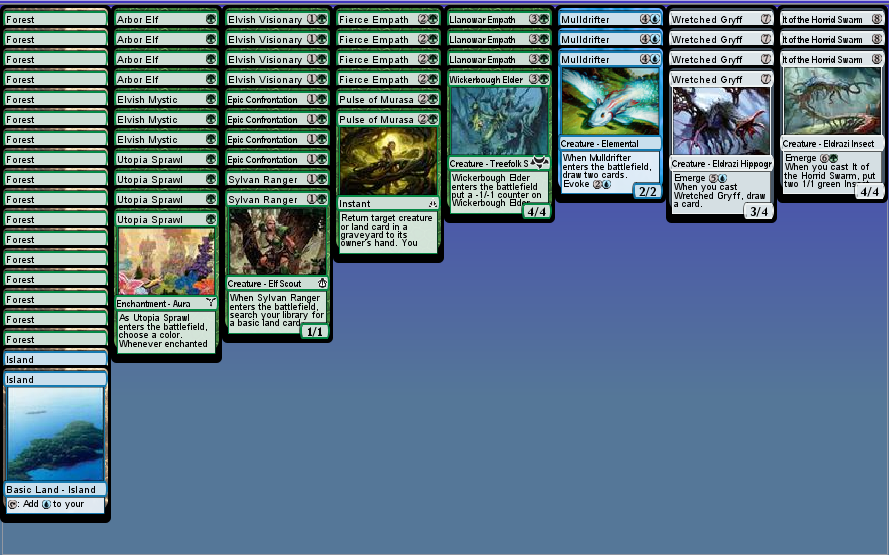 I decided to come out of my creative shell and write again about one of my favorite decks to play recently. The original decklist came from Alex Ullman, one of the premier authors on Pauper. You can find his article here. Funnily enough, it was just a decklist that was at the end of a general article on Pauper and the impact the New World Order has had on it. I was experimenting with the different versions of the Temur Emerge deck that broke out of the Pro Tour at the time that I noticed a Pauper Emerge decklist in Alex's article. After trying it out, I instantly fell in love. I am a sucker for value and this deck simply oozes value.

Cost reduction mechanics have typically been very good and/or downright oppressive in the history of Magic. The immediate one that comes to mind is Affinity. Affinity can be seen in virtually every constucted format since it's introduction in Mirrodin. I doubt we will ever get anything quite on the power level as Affinity ever again, but cost reductions are cost reductions. In the context of Emerge, Creatures become rituals on sticks with added effects stapled on such as drawing a card or fetching a land. That can obviously be very powerful as standard decks have already shown as the pros at the Pro Tour actually had to debate killing Pilgrim's Eyes of all things.

The Empath package and other Emerge fodder.

This deck features what I like to call the "Empath package" featuring Fierce Empath and Llanowar Empath. Fierce Empath is the single best creature to pair with Emerge. It boils down to being a tutor and a ritual in the same card! Llanowar Empath is a suitable source of card advantage. A notable interaction with the scry is that it goes against conventional wisdom in that you can leave a creature you would normally put on the bottom to ensure that you get card advantage out of it. Spinning the dice is always on the table with decent odds given the 31 creatures in the deck if you have others ways to gain card advantage. The rest of the Emerge fodder are cards like Elvish Visionary and Sylvan Ranger that gain an card or a land respectively. The mana elves can also be used as Emerge fuel if absolutely required.

While playing the deck, the typical game plan is to get a Fierce Empath or another fodder creature and use it to chain into the Emerge threats. There will be times where it will be necessary to chain a number of Emerge creatures. Generally, the plan will be to get It of the Horrid Swarm down first then chain it into a Wretched Gryff. I think a 3/4 flyer is much better than a 4/4 ground creature. It feels similar to a Birthing Pod chain except you can do all the steps in a single turn for a massive swing in board position and card advantage. Other times, the game plan will just be to go for the grind and don't waste Emerge threats into other Emerge threats. The deck plays like a fast midrange ramp deck.

I've found the deck to be well positioned against other fair creature decks. It goes wide just as well against token based decks and the top end threats can match up pretty well against any 3 or 4 drop respectively. The deck is very strong in board stalls because of Wretched Gryff. I've found that most opponents don't have removal for a 3/4 colorless flier that chips away at the opponent's life total.

The deck can struggle against Mono Black if the opponent can get Cuombajj Witches going early as a lot of the deck is full of 1/1s. The deck can also be weak to Gray Merchant as the removal suite is light. The deck is fairly resilient to edict effects however.

A sizable portion of the sideboard is devoted to the Drake matchup. I haven't had a ton of experience testing this matchup, but it feels pretty bad to me on paper. No instant speed removal or disruption in the maindeck. The goal is to race as fast as possible game 1. After board, options open up with more removal, counterspells, and also graveyard hate. I think the deck will get much better after the inevitable Drake banning.

I think the deck is a reasonable choice in most metagames and it's a blast to play. I'm surprised that no dedicated Emerge strategy has appeared on the MTGO metagame from what I can gather from my resources. It's possible there's a radically different build that can be successful such as Turbo Emerge including Frogmites and/or Skyshroud Cutters to power out an extremely fast threat or one that has more blue in it with Coiling Oracles, etc. It's still a fairly new archetype that can go in a few different ways, but it feels like it can be a player in the Pauper metagame. It's also fairly cheap comparatively clocking it at $34 dollars on TCGPlayer and less than $30 tickets on MTGO.